We didn’t make history. We didn’t record history. But you can say we helped test its ‘fracture resistance.’

Given how everything is done these days through online searches (and Bomas is active in that arena for machining of ceramics,) it’s not uncommon for us to get a random call about glass and ceramics as they relate to pottery. This one communication, although about glass, was not random and it piqued our interest. It came from a longtime colleague of ours, George D. Quinn, of Washington. We were happy to reconnect and it led to a successful joint project.

With over 50 years’ experience, Mr. Quinn is an expert in the study of mechanical properties of ceramics and glasses. A world authority on the subject, he wrote the definitive book: Fractography of Ceramics and Glasses.

Fractography?? Now that’s a word we know about at Bomas!

It’s the study of why things have fractured.  A more formal definition from Quinn’s book and which is even in an ASTM standard is: “The means and methods for characterizing fractured specimens or components.” Fractographic methods are routinely used to determine the cause of failure in engineering structures, especially in product failure and the practice of forensic engineering or failure analysis.

Quinn was studying glass made in Jalame, Israel in a Roman era glass factory that was active between the years 350 and 381 AD.  His samples were recovered from an archeological excavation done in the mid-1960s given to him for specific testing by the Corning Museum of Glass that was involved with the excavations.  The ancient glass composition was surprisingly similar to today’s common glass for windows and drinking vessels that is technically known as a soda lime silica.

His interest in this historic glass related to its “fracture toughness.”  His fracture toughness testing entailed the introduction of a controlled precrack into a test specimen and loading it until the crack propagates and the specimen breaks. The more fracture resistant the material, the greater the force necessary to cause the crack to propagate. No one had ever done this type of test on ancient Roman era glass.  Was the ancient glass more or less resistant to fracture than contemporary glass?  Had 18 centuries of exposure altered the fracture resistance?

Now he was speaking our language. Think MOR Bars!!

Working in conjunction with Mr. Quinn, Bomas successfully prepared bend bars and edge chipping plates cut and ground out of the ancient Roman era glass.  The work done by Bomas was a significant help to Mr. Quinn’s impressive research and dare we say that even J. Caesar would have raised a goblet in toast!! 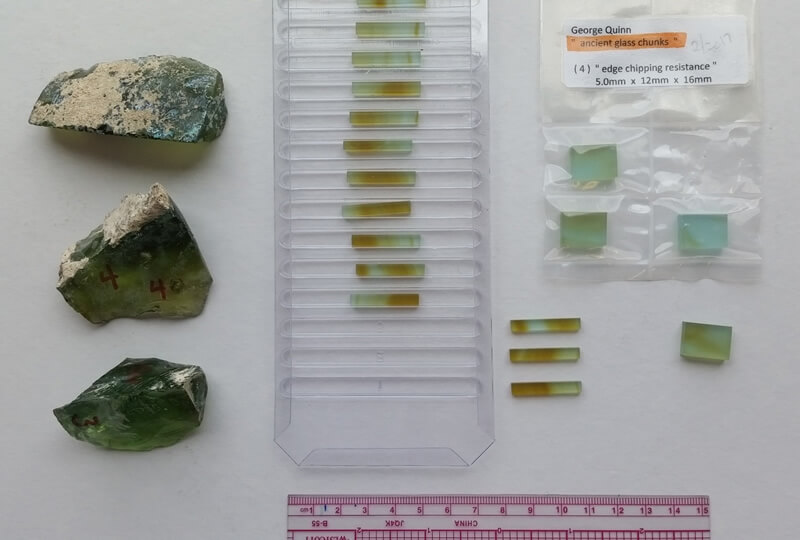 Shown above are various pieces of George Quinn’s ancient glass samples along with some of the bend bars and edge chipping plates that were cut and ground by Bomas.  The as-excavated cullet pieces have appreciable weathering and bonding to the earth from the 18 centuries of exposure.   There also are some color variations in the glass.

The final test results showed that the ancient glass had a very similar, but slightly less, fracture resistance to today’s glass.  Was this due to the exposure of 18 centuries in the ground, or due to fact the glass was hastily made and not homogenized in antiquity?    Only more such work will tell!

George Quinn started in 1969 as an engineering student trainee in the Ceramics division at the U.S. Army Materials and Mechanics Research Center (“Watertown Arsenal”) in Waterdown, Massachusetts and went on to become a staff ceramic engineer in 1973. In 1987 and 1988 he was an exchange scientist at the German Aerospace Research Laboratory in Cologne, Germany. 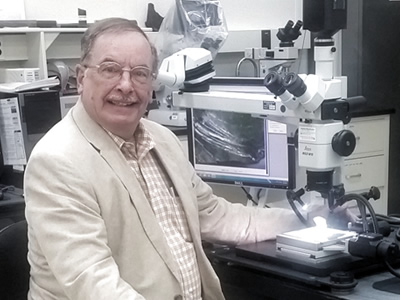 Quinn examining the ancient glass with a stereo microscope

He joined the National Institute for Standards and Technology NIST in 1990 and remained there until his retirement in January 2009. He continues to work there as a Guest Researcher. He also worked as a consultant for the American Dental Association Foundation’s Paffenbarger Research Center in Gaithersburg, MD, on the grounds of NIST, from 2009 to 2014.

As a world authority on standardization, mechanical testing, materials science, and fractography, he is frequently consulted on failure analysis problems. He is the author of 240 papers on topics including fractography, mechanical property characterization, standardization, and percolation theory. He has written 3 MIL, 15 ASTM, and 4 ISO standards. Mr. Quinn created 3 NIST standard reference materials including SRM 2100, the world’s first reference material for the property fracture toughness, KIc.

We took a big step into the future

You’ve Got Questions, We’ve Got Answers

We've added a detailed FAQ page based on what our customers are asking.

The Gong Gonged, Trumpets Blared, and Balloons Dropped From the Ceiling!

Well, maybe it didn’t happen exactly like that when we machined our two millionth MOR Bar;

When Age Looks Good on You

That’s the story of Bomas as they celebrate their 60th anniversary.